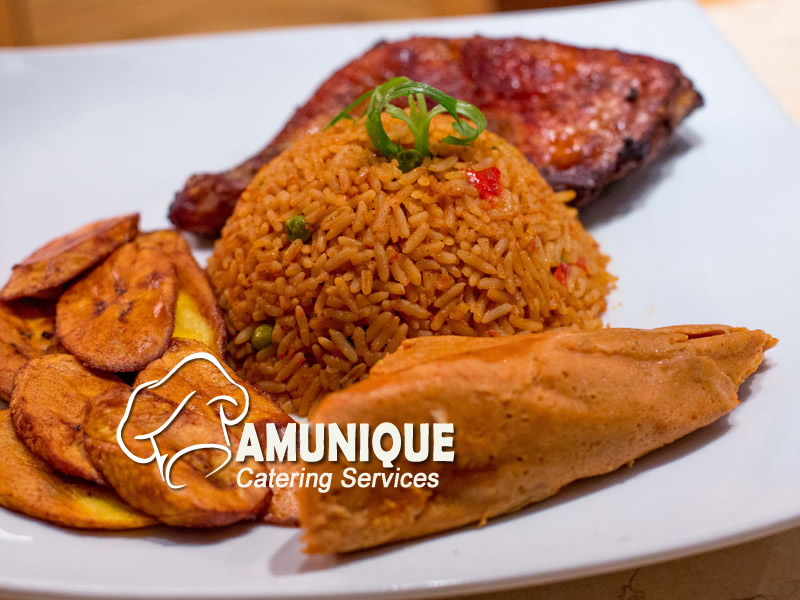 Jollof rice is one of the most common dishes in Western Africa, consumed throughout the regions of Gambia, Senegal, Ghana, Sierra Leone, Nigeria, Togo, Liberia, Mali, Ivory Coast and Southern Cameroons. In Cameroon it is a common favorite at ceremonies such as weddings, graduations and birthdays and is sometimes cooked with “ndole”, a local vegetable. There are several regional variations in name and ingredients. The name Jollof derives from the name of the Wolof people, though in Senegal and Gambia the dish is referred to in Wolof as theibou dienne or benachin. In French-speaking areas, it is called riz au gras. Despite the variations, the dish is “mutually intelligible” across the region, and has spread along with the diaspora to become the best known African dish outside the continent.

Based on its name, the origins of jollof rice can be traced to the Senegambian region that was ruled by the Jolof Empire. Food and agriculture historian James C. McCann considers this claim plausible given the popularity of rice in the upper Niger valley, but considers it unlikely that the dish could have spread from Senegal to its current range since such a diffusion is not seen in “linguistic, historical or political patterns”. Instead he proposes that the dish spread with the Mali empire, especially the Djula tradespeople who dispersed widely to the regional commercial and urban centers, taking with them economic arts of “blacksmithing, small-scale marketing, and rice agronomy” as well as the religion of Islam.

The dish consists of rice, tomatoes and tomato paste, palm oil, onions, salt, spices (such as nutmeg, ginger, and cumin) and chili peppers (such as Scotch bonnet); optional ingredients can be added such as vegetables, meats, or fish. Due to the tomato paste and typically used red palm oil, the dish is mainly red in colour. The recipe differs from one region to another.

Get to Know More

Our Menus are exquisite and diligently prepared by our team of highly qualified chefs to complement the style of your event. We are one of London’s leading contemporary caterers.